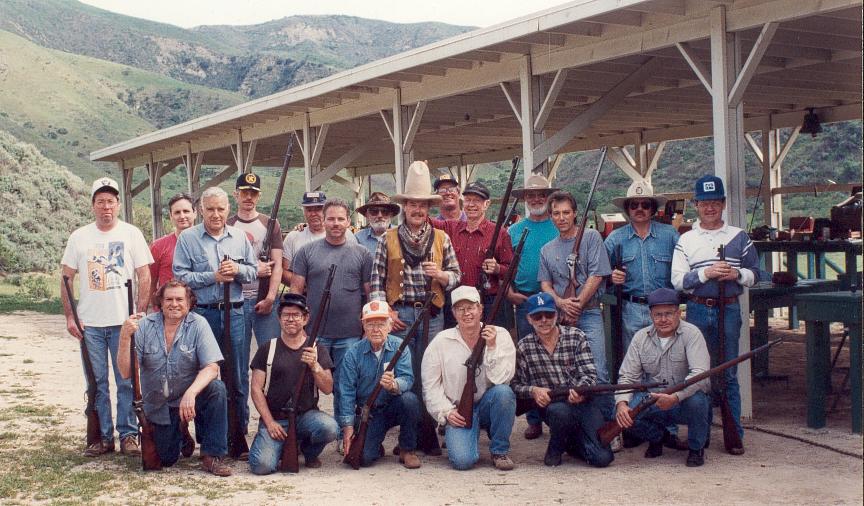 Burbank Muzzleloaders Newsletter July 2021
Contact us at burbankmlrpc@aol.com
On July 4th, Burbank Muzzleloaders enjoyed its annual potluck picnic to commemorate the independence of our country. It was modest and simple yet scrumptious and hearty with the usual hot dogs, potato salad, and yummy chips. It was a great respite, for just before, the club had competed in its patriotic flintlock match, hosted by John Clevenger. The rules were a tad different this year as shooters strove to finish shooting all the targets the most quickly no matter how many shots were fired. Targets were the usual pennies, toothpicks, popsicle sticks, playing cards to be split, bottle caps, and of slight difference, poker chips dangling in the wind by a string. Jannu Lorentson easily took the win with a beautiful flintlock he of course had fashioned himself. Sam Baseman came in an official second but did not finish all the targets, nor did any other competitor. Eric Blakely naively tried to compete in the match with a flintlock pistol but to no avail. He then took the rifle he had loaned Sam and hit all the targets, but, alas, the match had already concluded, and so, again, the popular phrase rings true- It’s always like that after a match. We’ll see about next year!
The following week, on the 11th, John Clevenger again hosted a match, this one being the any-gun bench-rest match with ten shots each at 200 and 100 yards. The match culminated in a challenge of shooting at a paper target of a chain suspended between two round drums. This time, if one hit those drums, it was minus ten points. Needless to say, it was a deal maker or breaker. In the end, Jim Eggleston came out on top with some fantastic shooting. He used a scoped .45-90 but only shot 55 grains with a 330-grain bullet- an unusual combination facilitating outstanding shooting. Yes, “any gun” may also include scopes in this match. Sam Baseman grudgingly came in second; perhaps he’ll use a scope next time! Prizes were the usual victuals to keep us black powder shooters well-fed: powder, lead, primers, and patches.
Burbank Muzzleloaders’ next match, to be held on August 8th, will be silhouettes with the normal targets at the typical yardages. Additionally, of interesting note, August has five Sundays, and that means another walkthrough match on August 29th. This will be the fourth trail walk of the year and will be added to the cumulative tally of walkthroughs, which will culminate in another prize, generously donated by Tom Trevor.
As you can see, the club has been and is active with plenty going on that you simply don’t want to miss! We’ve got some fantastic matches coming up in the final months of 2021, so keep those rifles hot. Well, that’s all for now folks, so don’t forget about Burbank Muzzleloaders, the place to shoot!